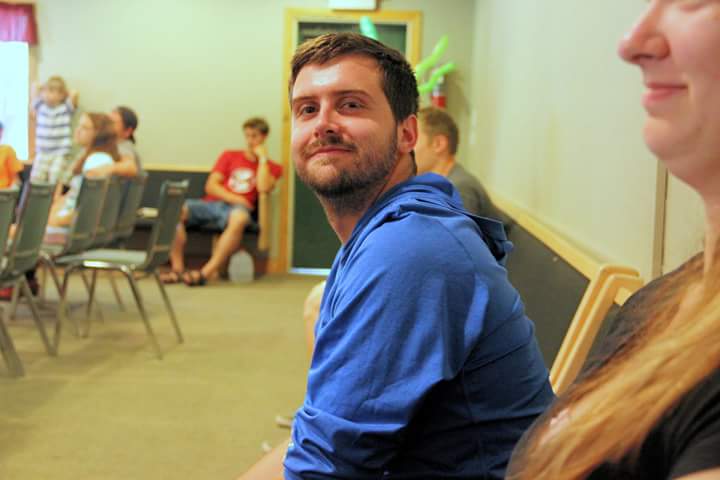 ​My name is Brandon and I'm 21 years old. I've been living in Central Oregon for a 7 or 8 years now and been a christian for about the same amount of time. However I didn't really know the love of God and the power of Jesus till last year. Allow me to explain.

In high school I came to know the Lord through my friends, my family and a set of Kent Hovind creation science seminar tapes. Creation science became my drug and I dosed daily. I started reading my bible daily, learning to pray, and becoming who I was supposed to. I did all the normal teenage boy things: chasing girls, long boarding, listening to angsty music with my friends, spending time with people who had as hard a time with the world as I did and talking about it. The world was a place I felt I needed to survive in until I died, not a place to live a full and wonderful life till I met my Daddy. The home was a place I felt I never fit in, half filled with acceptance and the other half filled with unmet expectations. Laws and rules were my understanding. Failure was met with disappointment. Weakness and vulnerability were met with stone hammers. My desire to be close to the ones who I was supposed to trust the most in this world (my parents) were met half with enthusiasm and overwhelming welcoming and the other half with disdain and feelings of failure as a parent which turned back to me in a brief extent which never was followed up. It was a struggle on both ends to really connect.

After high school I got together with my Oregon high school sweetheart and we quickly fell in love. But soon enough I realized she wasn't who I thought she was. For two years I bore down, trying desperately to make something work that wouldn't. I tried so hard to extinguish my sexual drive, to control my emotions and muster up a sense of compassion, I wanted to prove to myself and to God that I could love and accept someone who was broken and that I had enough grace in my heart to do it genuinely. Anything less was failure and the words passed down to me would be made true. I couldn't allow that to happen. This resulted in daily panic attacks. Feeling like my head and heart were splitting in two as I tried to live a double life. I was serving in church on the worship team, leading worship for the youth, working hard at my job and spreading the gospel at every chance I could. Yet in my heart there was no room for God's grace because I was trying to prove that I was good enough, trying to obtain loving intimacy between me and another human I had yet to experience, under the weight of my own shame, guilt and condemning myself.

It was about last year at this time I met John Ford my colleague and friend. He told me something through his actions that I had never heard before. "God is never ashamed of you, God is never mad at you, and God never looks away. He loves you even while you're sinning and accepts you just as you are" (We'll get back to him in a second.) This statement can be summed up in one word and one person. Grace is the word, and Jesus is that person. I had heard that God loves me all the time. I mean of course, how could he not if he IS love? But there was no way that God wasn't ashamed of me, let alone proud of me. I mean look at my life. I was in an immoral relationship, holding on to it, tightly. After that I was struggling with pornography on a regular basis and I bore the weight of my own pain I felt from the things handed down to me from my parents. I brought another girl soon after that to move in with me which we all know how that old song and dance goes. How could God....like me? Sure He loves me. But you can love someone and not like them. This is what I believed.

In my college group I attended we read the book "The Cure" which is a book about a man at a crossroads between pleasing God and trusting God. This is where I first heard the word grace. The meaning behind it was completely foreign to me and I didn't have any basis for understanding it as it had applied to my life. It may as well have been some strange lost greek word that they just discovered written on a moldy manuscript found in some ancient cave. But the concept when explained to me sparked my interest. "Mercy is not getting what you deserve. Grace is getting what you don't deserve" became "I deserve to go to hell, I deserve to live without God, I deserve to die. I don't deserve to have relationship with God, I don't deserve his favor or his love. Because of the Cross, I don't get what I deserve and I get to have what I don't deserve." This began to grow in my mind and at just the right time John came (remember, from earlier?) He stepped into my life and gave me something I never thought I would ever have. A loving Father figure who accurately portrayed the Grace of our loving God Jesus Christ. I felt safe. I felt secure. I felt loved. For really the first time I had the wherewithal to ask myself "If someone can love me like this and never leave me...never prioritize things that don't matter over me, and never condemn me with what's wrong with me...is it possible that God loves me this way too?" The answer flooded my heart over the next 8 months with a resounding YES!!! I couldn't believe the freedom! All it took was one person to respond to me when I asked "Why do you love me?" with "I just do"

I began to change. People noticed the difference in how I carried myself. People began to hear the whispers of Brandon's life being changed. Friends told me "I barely recognize you, you've changed." My brothers and sisters began to notice even from different states "Brandon we're so proud of the man you've become." God brought me through. He never abandoned me. Now I can see from this altitude just how far God went to bring me out of the lies that so strongly held my heart. I never lifted a finger. Jesus led me by the hand to His streams and encouraged me to drink.

This is the Gospel. This is the truth of the Love of our God and this is the truth of Easter and the Resurrection. God loved you (and likes you) so much that He'd rather die than be without you...and He did so he would never have to. This is your Daddy. Take some time today to just let Him hold you and tell you how special you really are to Him. We love you.