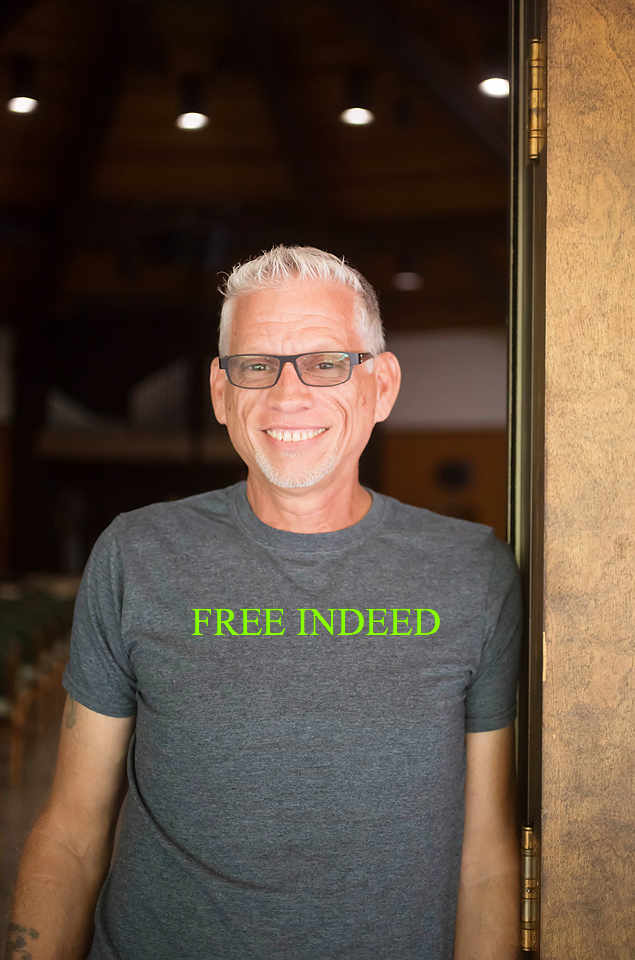 The title of John’s story came from words he spoke in our interview. That’s how he described his journey, as dark steps on the road of faith and finding the light of grace. I don’t think I could have spun any other words together to have better conveyed the truth of his story.

John was seven when he first had sex with a man. There wasn’t anything odd about it. He just thought it was something that people did.

At 16, he came to Christ, his parents separated, and he moved with his mom from Oregon to New York. His high school years were defined by constant moving around. He attended 5 or 6 different high schools in 4 years. At 17, they moved back to Oregon and reunited with his father.

In Springfield, Oregon he attended an Assemblies of God church. He dated 3 girls at the same time, which was great fun, he says, and at 19 joined the Navy. It was about that time when John began to struggle with same-sex attraction. That happened to be the same time the Navy was on a full scale hunt for homosexuals in their ranks. John was targeted and baited. Though he didn’t take the bait as it had been offered, he still found himself awakened at 4 a.m. by military police and taken away to be court marshaled.

In this dark step, John saw God’s hand of mercy on him. The other sailors who had been targeted and baited were dishonorably discharged, and surprisingly, the court found the man who tried to entrap John guilty. That man ended up being court marshaled and black marked, while the court had compassion on John and gave him an honorable discharge telling him that they weren’t allowed to keep him in the Navy but that they hoped his life would not be marred by this experience.

At 21, John married Katie. He hoped that this would put an end to his troubles and fears; that marrying would take away the pain, doubt and confusion. He and Katie had 2 children, a son and a daughter. But after years of struggle, they divorced.

It was after these life events that John’s parents decided that they no longer had a son that they could love and accept.  A funeral was held for him by some at a local church. He was told he was dead to them. There are no words to describe this.

It was another life altering incident, where John was attacked, beaten and left in a field to die. Just as he had been targeted and baited in the Navy, this man lured him into a field and doled his own judgment out on John. He was badly beaten and his jaw was broken. “God got me out of that field,” John says, though he doesn’t know how.

The next dark step was back to San Diego. It was there where John dove head first into the homosexual lifestyle. He found acceptance and belonging. He met someone who vowed to commit to him and who helped him reestablish his connection with his children. But this bliss lasted for only a while and ended painfully. John’s companion became ill from complications from AIDS. Though contact with his family had been minimal, John called his sister who came and prayed with his friend. He recalls the nice room they were in at the hospice center where they gave John a morphine stick to ease the last moments for his friend. This was indeed a dark step for John.

Through all of this John was never bitter towards his parents. He understood why they didn’t want to have anything to do with him, but he hated God. He always had good jobs and was able to raise his children starting at the age of 10. He had never gotten sick, though he was HIV positive. His words were, “God was good to us, but I never acknowledged it.”

In 2001, John moved to Sacramento. The kids were grown and changes were happening in his heart. A television program featured a motivational preacher whose message resonated with him. It was a message that caused him to begin to believe that God was drawing him closer. He started to pray and God began to heal. He had questions and began to search for answers. He stopped living the lifestyle he had known for so long. He talked with his children and apologized for the life he had lived in front of them. Their response was one of love.

The next stop for John was Colorado. Life had begun to come together, but this stop proved to have its dark spaces as well.  More and more isolation came like pounding waves.

John knows rejection. He has felt it from strangers, friends and family. He’s been kicked out of homes, churches and organizations; he’s been beaten and discarded and left for dead. And the acceptance he felt from the gay community began to show itself for what it was: as an invitation to die.

At his lowest point, when rejection and pain were at full force in John’s life, his sister called and told him that their dad had had a devastating stroke. After years of God’s loving restoration of his heart and mind, John packed a few suitcases and 24 hours later, December 1st at noon, he pulled up in his parents’ driveway. John’s words about that day were these, “I had no relationship with these two people. And yet God put me in a car and brought me here, to love and accept them. After 20 years. I don’t know…maybe I should look at what God has done.” John goes on to say, “The grace of it all is that I didn’t do anything to put it back together. It was given by God.”

Today John lives with his parents and cares for them daily. Though his father’s stroke has left him unable to have a “normal” relationship, he has reunited with his mother. John also works to grow the ministry he founded called Free Indeed. John’s efforts of being good weren’t what brought about reconciliation and redemption. He didn’t pull everything together and then God decided to use him and heal him. He still struggles. The scripture John recites is I Corinthians 9:22, 23 to explain how he sees God working, “To the weak I became weak, to win the weak. I have become all things to all people so that by all possible means I might save some. I do all this for the sake of the gospel, that I may share in its blessings.” God reminded John of the key moments in his life, all the pain, sorrow, rejection, feelings of emptiness and complete loss of hope…and showed him that He was with him every dark step.

“So grace is the message,” John says about the ministry of Free Indeed, “an absolute, unyielding explosion of grace. We don’t need to know anything about you, because God loves you.”


Those dark steps of faith were taken one step at a time. John looks back and sees how far he’s come from those dark steps into the wonderful, freeing light of God’s grace.